The world has always witnessed migrations and the displacements of humanity for food, for better life and to escape from misery and war. But the migrations of 21st century are unique in the sense that people are constantly on 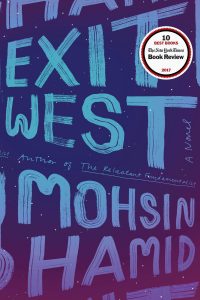 the move because of the wars, famines and economic crisis but unable to settle down anywhere. The destinations for these migrations is mostly Europe and USA, the developed world which has reaped maximum of the fruits of globalization. The globalization instead of resulting into a utopia and world paradise has instead appeared as a dystopia under the neo-colonialist policies of the developed world. The economic and socio-political disparities have forced the humanity to move towards metropolises of the world. These migrations have not only increased in number but also in volume. But instead of getting access to the destinations of the migration and getting settled there, the humanity is under a huge migration crises and so even after getting displaced from their countries and attempting to find a better home, migrants have become unsettled.

Hamid’s novel Exit West approaches this very crisis at a very appropriate time and hence discusses and analyses to let the world hold a better grasp on it. In his interview, Hamid explained that he has made use of opening and closing of doors in his novel Exit West, to show migrants, including Nadia and Saeed, the world of their dreams and to open new opportunities for them as per their wishes. These doors, according to him, are less of a magic but are of the possibilities in the modern world as to how quickly and easily we can visualize the other parts of the world, which had been possible so recently not without torments of the journeys. I mean, there are the people who are now global citizens, who can travel so fast and so comfortably from one country to the other that their journeys are just like the opening of a door and entering into a different world. The same doors, however, work for the dreams of the migrants that migration for them has become a matter of ‘have to’ instead of ‘want to’ and in such a scenario, these migrants tend to think like there might have been a door like that of the ‘sesame’ and they would just utter a word and the new doors of their lives would open into rather the even greener pastures of the world.

These doors may be magical, like any science fiction of the day or the old fantastic yet mythical tales, my classroom discussions also show that the writer has used them for avoiding the details of difficulties of journeys, because perhaps he wanted to dwell more upon the change that the migrants have to undergo regarding their relationships, their psychologies, their losses of identities and their new life that would make them.  Every migrant even after so many losses, as is experienced by Nadia and Saeed, has hope and would wish to pass through a door “to the new city of Marin, on the Pacific Ocean, close to San Francisco,” and is … filled with hope, … to reconnect with their relationship, as it had been not long ago, and to elude, through a distance spanning a third of the globe, what it seemed in danger of becoming.” (p. 190)

Seen in this context Hamid’s novel becomes a tale of the global citizens who are forced to become so because of their migrations and as soon as they leave their native places, the whole world becomes their country and so they would wish to just open a door and enter into a different world of their own. But all this is not without a conflict because the world which lies beyond these doors never wishes to leave the doors unguarded as is the wish of the migrants to find the doors unguarded.  The debate therefore is now on Global postcoloniality.