A term coined by Edward Said in his magisterial work Orientalism.

“Orientalism” is a way of seeing that imagines, emphasizes, exaggerates and distorts differences of Arab peoples and cultures as compared to that of Europe and the U.S. It often involves 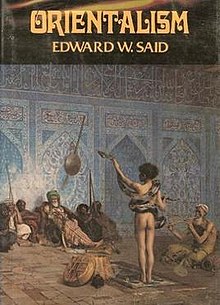 seeing Arab culture as exotic, backward, uncivilized, and at times dangerous. Edward W. Said, in his groundbreaking book, Orientalism, defined it as the acceptance in the West of “the basic distinction between East and West as the starting point for elaborate theories, epics, novels, social descriptions, and political accounts concerning the Orient, its people, customs, ‘mind,’ destiny and so on.”

According to Said, Orientalism dates from the period of European Enlightenment and colonization of the Arab World. Orientalism provided a rationalization for European colonialism based on a self-serving history in which “the West” constructed “the East” as extremely different and inferior, and therefore in need of Western intervention or “rescue”.

Examples of early Orientalism can be seen in European paintings and photographs and also in images from the World’s Fair in the U.S. in the 19th and early 20th centuries.

Author of "ISIS: Ideology, Symbolics and Counter Narratives" (2019) Masood Raja is a former associate professor of Postcolonial Literature and theory.
Toggle Sliding Bar Area
Page load link
This website uses cookies to improve your experience. We'll assume you're ok with this, but you can opt-out if you wish. Cookie settingsACCEPT
Privacy & Cookies Policy